SEVENTH PILGRIMAGE OF THE PEOPLE OF SUMMORUM PONTIFICUM AT ROME, 26-28 OCTOBER 2018

The international pilgrimage of the people of Summorum Pontificum in Rome will be taking place from Friday 26 to Sunday 28 October 2018. This year Bishop Czeslaw Kozon of Copenhagen will be leading the pilgrims on their way to Saint Peter. On the first day of the pilgrimage there will be a day-long information session on the progress of the motu proprio’s benefits throughout the world.

I –The Friday Encounters

The Augustinianum Patristic Institute, right across from the Holy Office on the edge of Saint Peter’s Square, will be the venue for the Summorum Pontificum encounters, which are a preliminary to this pilgrimage. Participants are welcomed from 9 o’clock on and the day’s work starts at 10. Cardinal Burke will preside over this day and will impart his blessing at the beginning. Christian Marquant, president of Oremus Paix Liturgique, Felipe Alanís Suárez, president of the FIUV, and Bertalan Kiss, president of Juventutem International, will each share their take on the international growth of the Summorum Pontificum movement.

About ten presentations—including that by Cardinal Zen, archbishop emeritus of Hong-Kong, and by Fr. Charles Ike, FSSP, from Nigeria—will make it possible to consider the worldwide interest of the faithful in the motu proprio Summorum Pontificum and its progress.

The detailed program will be available in early September. Expenses, including the luncheon buffet, will be 15 Euros for laymen; free access is granted to all clergy, religious, and seminarians who register in advance. You can preregister as of now by sending an email to pilgrimagerome@paixliturgique.plus and we’ll send you the final program of the Pilgrimage and Encounters in the first week of September.

Friday 26 October at 6pm: Solemn Mass will be celebrated at Trinitŕ dei Pellegrini church. This seat of a personal parish erected in 2008 at Pope Benedict XVI’s request is a church built on the location of the hospice where Saint Philip Neri used to take care of pilgrims and the poor; it is the usual hub of the pilgrimage organized by the Cśtus Internationalis Summorum Pontificum (CISP). This Mass will be both that of the spiritual opening of the pilgrimage and also a Mass of Thanksgiving for the FSSP’s thirtieth anniversary. The celebrant will be Father Ike, a priest of the FSSP ordained in Nigeria in 2017, a perfect example of the FSSP’s expansion in the world and of the universal response the traditional Mass has received.

“The Fraternity of Saint Peter has been, from the very beginning, a faithful partner of the Populus Summorum Pontificum pilgrimage through its Trinitŕ dei Pellegrini parish, whose pastors—formerly Fr. Kramer and now Fr. Sow—are always pleased to welcome us,” explained Giuseppe Capoccia, delegate general of the CISP. 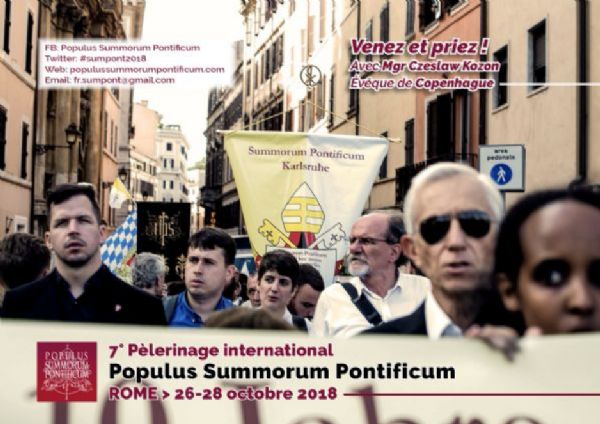 Saturday will be the “heart” of the pilgrimage with a solemn procession in the streets of Rome and the Pontifical High Mass celebrated in Saint Peter’s Basilica.  This year, the organizers have invited the bishop of Copenhagen—a diocese that covers all of Denmark as far as the Faroe Islands and Greenland—to celebrate in the Vatican basilica. At 9:30, the pilgrims will meet in the basilica of San Lorenzo in Damaso, piazza della Cancelleria, for Eucharistic Adoration (confessions available). At 10:30, the solemn procession, led by Bishop Kozon, will start up on the via del Pellegrino, then move on to the Sant’Angelo bridge and lastly Saint Peter’s Square after going up the via della Conciliazione. The High Mass celebrated by Bishop Kozon starts at noon.

Following the Mass at Saint Peter’s two associations, Oremus and Una Voce, will offer a buffet for the clergy, religious, and seminarians who attended the ceremony while Juventutem will gather the young pilgrims. (Please register if you wish to participate in this function) At 6pm, the vespers of Christ the King will be sung at Trinitŕ dei Pellegrini church by Archbishop François Bacqué of Gradiscao, apostolic nuncio who served in the Netherlands.

Sunday 28 October, feast of Christ the King, a solemn Mass will be celebrated at 9:30am in the church of Jesus and Mary (Institute of Christ the King Sovereign Priest, via del Corso) for those pilgrims desiring to attend the pope’s Angelus afterwards, while Archbishop Kozon will celebrate the closing Mass of the pilgrimage at 11am at Trinitŕ dei Pellegrini. ------- Click here to view the pilgrimage website.

(for now, French edition available only)